The first band I’d like to bring to the table for splendid observation  is a vicious 3 piece Rock/Blues band from Athens GA. Relatively recent to the scene but not at all to the craft and livelihood of Rock N Roll . They are The Free Associates. Good God,man! If you have vicariously made your way around the nightlife of town in hopes for a good live Rock show(or hopes of your own personal means, for that matter), there is a big chance these guys were the reason you didn’t wake up until 3pm!

We’ve all been there. Bouncing around trying to find a good show only to find pretentious hipsters with their iPads, Punk bands that care more about how overtly dirty they look rather than what they’re playing,  ‘desperate to be’ reincarnations of Brantley Gilbert, overbearing Indie kid turned Math Metal wizards(thank God for effects pedals), and lets not forget the fedora sporting Folk masters. But have no fear! The Associates are here!

The best thing about them is they’re an actual band! Not tied down to digital equipment. No theatrics to boot! Not to say that all bands/music in town isn’t genuine, but there is something to admire and learn from with these guys as far playing who they are and doing it very stripped down without reliance on their gear. Just how Rock and Roll began. The overdriven Link Wray-esque style strums of Scott Laniak’s guitar, low fuzz bass from Tim Robinson and powerful drums from Larry Choskey gives complete distorted homage to electric blues of the late 1950’s. Additional sweet notions include Laniak and Robinson’s rotation in lead vocals, dynamic group chants and a vast catalog of traditionals, covers and originals all smothered in the Blues. Their live set is such a must!

But hey now, its all for the love of music and this trio proves that by being in so many other acts with one another. When not associating themselves freely, they are apart of numerous other bands in Athens including Nate & The Nightmares led by Cars Can Be Blue’s Nathaniel T. Mitchell, Jones Maintenance All-Stars and more. The Free Associates will be performing this Thursday (Aug22nd) at Little Kings in Athens GA with Timmy & The Tumblers and Florida’s own Fat Night! Check Em’ Owt! -GH 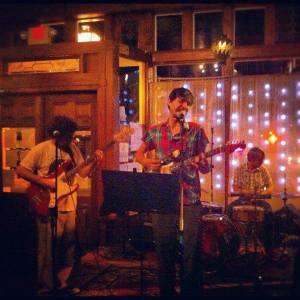 3 responses to “[Check Em’ Owt!] Why The Classic City Needs the Free Associates”